Blazing October:  And it’s not just about leaf colour; many shrubs and herbaceous plants continue giving of their best all through the month and on until nipped by the first wintery weather.  Michaelmas daisies have been in flower from August.  The later flowering Japanese anemones,  sedums and persicarias pack a punch of colour too..  A great combination for a moist soil: Aster amellus ‘King George’, Anemone hupehensis var.’Pamina’ or Anemone hupehensis ‘Hadspen Abundance’  with Hesperantha coccinea ‘Major’ and Persicaria amplexicaulis ‘Fat Domino’ throw in a Miscanthus or Molinia and your have a combination crackling with colour and texture.  For a drier spot try Sedum spectacle ‘Brilliant’ with one my favourite small shrubs Cerastostigma plumbaginoides, it has electric blue flowers, the leaves turn to a contrasting deep purple.  Hydrangea quercifolia also has wonderful deep coloured foliage which shows off its white flowers.  A large shrub/small tree for leaf colour? you can’t beat Cornus mas, (the cornelian cherry) which also has a scented yellow flower in early spring.  For leaf colour alone the Japanese acers are astounding.

Garden work-out: Let’s hope there will be good weather for the next month because there is much to be done.  This is an ideal time for planting shrubs and herbaceous plants.  The soil is still warm and the roots will have time to establish before plants become dormant.  All the better to get going as soon as possible in Spring.  So if you have been meaning to sort out that border, now is the time to get out there, dividing and replanting, moving things around.  Shift that rhododendron that is blocking the light, move that hardy geranium that is squashing its neighbours, ditch that phormium or flowering currant or lilac or anything that is taking up too muck space and not pulling its weight. 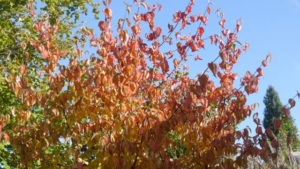 Prepare for Spring: Now is the time to plant out vegetable seedlings, such as broccoli and cavalero nero for harvesting next year.   Garlic bulbs can go in now or later in the month.  Sow hardy seeds such as broad beans.   Plant bulbs in containers like tulips and wall flowers for spring. 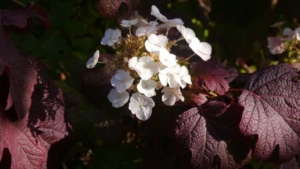 Keep it messy for Wildlife.  Don’t be too tidy, leave some piles of leaves and twigs for hedgehogs – you might be lucky.  Bundles of stalks make good overwintering shelter for insects. Leave seedbeds where they are for the birds.
Shopping:  Order bare root roses and trees for planting during the winter.

The cold, the wet and the windy:  Take in any house plants indoors.  Get tender plants under cover, the greenhouse.  Make sure pots are lifted off the ground, using small chocks, this will ensure good drainage, a waterlogged plant will soon die.  Cut back long whippy growth on roses and other shrubs such as buddleia and elder to avoid wind rock.  But don’t cut back the coloured stems of dogwoods and willows, they will give you colour and structure during the frosty weather.  Wait until the spring.  And finally start mulching the garden wherever  you can, it will protect your soil from excessive wet and compaction.

Page load link
We use cookies on our website to give you the most relevant experience by remembering your preferences and repeat visits. By clicking “Accept”, you consent to the use of ALL the cookies.
Cookie settingsACCEPT
Manage consent

This website uses cookies to improve your experience while you navigate through the website. Out of these, the cookies that are categorized as necessary are stored on your browser as they are essential for the working of basic functionalities of the website. We also use third-party cookies that help us analyze and understand how you use this website. These cookies will be stored in your browser only with your consent. You also have the option to opt-out of these cookies. But opting out of some of these cookies may affect your browsing experience.
Necessary Always Enabled
Necessary cookies are absolutely essential for the website to function properly. These cookies ensure basic functionalities and security features of the website, anonymously.
Functional
Functional cookies help to perform certain functionalities like sharing the content of the website on social media platforms, collect feedbacks, and other third-party features.
Performance
Performance cookies are used to understand and analyze the key performance indexes of the website which helps in delivering a better user experience for the visitors.
Analytics
Analytical cookies are used to understand how visitors interact with the website. These cookies help provide information on metrics the number of visitors, bounce rate, traffic source, etc.
Advertisement
Advertisement cookies are used to provide visitors with relevant ads and marketing campaigns. These cookies track visitors across websites and collect information to provide customized ads.
Others
Other uncategorized cookies are those that are being analyzed and have not been classified into a category as yet.
SAVE & ACCEPT
Go to Top