Smells and Grace: Those of us who are lucky enough to garden on acid soil can grow some rather brilliant plants.  I turn my attention particularly to scented Rhododendrons, I don’t just mean the deciduous varieties of azalea, (latin name Rhododendron), which is famous for its most intoxicating scent.  The ones I describe here are evergreen, often with very handsome shiny leaves. they only flower for a relatively short time, but when the do, they are wonderful, particularly when scented. 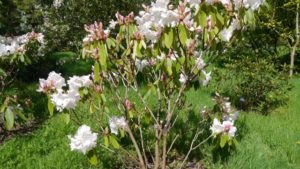 Rhodos for your noses: Rhododendron loderi “King George’ is the star of the show.  It will eventually become a small tree, reaching 10’/3m in 10 years, however it does need shelter from strong winds.  The pink buds open to large trusses of pure white scented flowers with faint green markings.  Another feature is that the new growth stands up in spikes – think Nigel Kennedy’s hair – quite striking.  R. loderi ‘Pink Diamond’ is a tad smaller than ‘King George’ – in fact about half the size, so may be more suitable for most gardens.  The flowers are pinker, but equally prolific and scented.  Rhododendron ‘Igtham yellow’ – making a change from pink – this one has apricot buds opening to pale yellow flat faced flowers with a small red blotch. Slightly scented in early May, Again not quite so huge as the ‘King George’, it forms a dome shaped plant which is fairly loose in habit. Height 5’/1.5m in 10 years. It does need good drainage without being dry, dappled shade and  shelter. To continue the season of interest plant a Rhododendron ‘auriculatum’  for its scented white flowers which appear in July and August.  Like all of the rhododendrons it does need that shelter from the wind.  Aproximate growth 6’/2m in 10 years, but given the right conditions will reach 10’/3m or more. 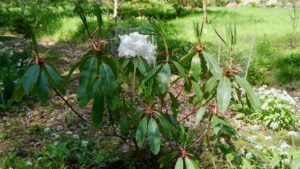 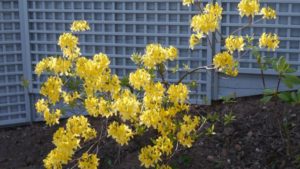 Rhododendron luteum, the familiar deciduous azalea, with the witchy scent.

Climatic challenges: There’s still a chance of low temperatures overnight, or even frosts, so be wary of planting out anything tender until the end of the month.  Even thought days have been sunny and dry, the soil will take much longer to warm up, so seeds sown direct into the soil will be at a disadvantage.  Sow salads under cover and ease their entry into the outside world once the leaves are showing, by putting the pots out during the day and taking them in at night for about a week, before eventually planting them out. 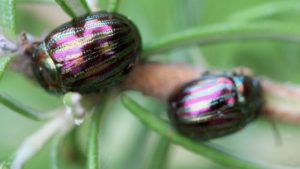 Pests both beautiful and destructive:  I’ve not seen a lily beetle this year – usually they are munching away at the fritillaries, they are easy to spot with their bright red colouring.  More surprisingly I have caught and crushed a rosemary beetle, this is another pretty one with iridescent green and pink stripes.  However it is a voracious feeder on lavender, rosemary, sage and thyme.  Not the sort of wildlife which will add to the attractiveness of the herb garden.  If you do find any, please report to the RHS.

After flowering: Prune camellias with care and  restraint. They are slow growers so need only a light touch, removing congested branches.  Prune early spring flowering shrubs such as forsythia and ribes, cutting some of the oldest and thickest stems down to the ground.  This will reduce the bulk of these vigorous shrubs and encourage next years’ flowers.  It is well worth removing the spent flowers on rhododendrons, watching out for new shoots, it will also help with next years’ flowers.

Page load link
We use cookies on our website to give you the most relevant experience by remembering your preferences and repeat visits. By clicking “Accept”, you consent to the use of ALL the cookies.
Cookie settingsACCEPT
Manage consent

This website uses cookies to improve your experience while you navigate through the website. Out of these, the cookies that are categorized as necessary are stored on your browser as they are essential for the working of basic functionalities of the website. We also use third-party cookies that help us analyze and understand how you use this website. These cookies will be stored in your browser only with your consent. You also have the option to opt-out of these cookies. But opting out of some of these cookies may affect your browsing experience.
Necessary Always Enabled
Necessary cookies are absolutely essential for the website to function properly. These cookies ensure basic functionalities and security features of the website, anonymously.
Functional
Functional cookies help to perform certain functionalities like sharing the content of the website on social media platforms, collect feedbacks, and other third-party features.
Performance
Performance cookies are used to understand and analyze the key performance indexes of the website which helps in delivering a better user experience for the visitors.
Analytics
Analytical cookies are used to understand how visitors interact with the website. These cookies help provide information on metrics the number of visitors, bounce rate, traffic source, etc.
Advertisement
Advertisement cookies are used to provide visitors with relevant ads and marketing campaigns. These cookies track visitors across websites and collect information to provide customized ads.
Others
Other uncategorized cookies are those that are being analyzed and have not been classified into a category as yet.
SAVE & ACCEPT
Go to Top